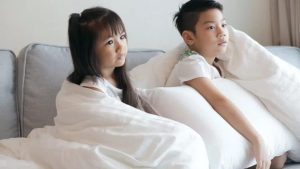 As parents, we often rely on our phones and cartoons to entertain our children while we are busy or need a break.

However, some of these cartoons might be doing more harm than good, especially when left to the child without parental guidance or supervision.

Here are some children’s shows that might hinder your child’s development. Many parents are familiar with this children’s series on Netflix and YouTube.

Its bright visuals, repetitive music and sounds make it hard to miss. But studies show that these attractive points make it hyper-stimulating and addicting to children – almost like a drug.

This has caused quite a huge debate over the internet.

Some parents on Reddit mentioned that their children become ‘zombified’ and are ‘in a trance’ due to overstimulation after watching “Cocomelon” even for a short while.

This overstimulation then causes children to experience symptoms of addiction and withdrawal – making them very dysregulated.

As they continue watching the series, many children were also reported to be having more tantrums after watching “Cocomelon”.

If your child loves shows like this, “Classical Baby” is a more relaxed choice. It is available on YouTube or HBO Max. “Peppa Pig” has a sassy and not-afraid-to-speak-up attitude, making her lovable and relatable.

If you find that your child likes “Peppa Pig”, many of these parents recommended “Bluey” – an Australian television series, as a better alternative.

They claim that “Bluey” displays good manners and is a better role model for your child. There is much controversy around whether “SpongeBob SquarePants” is bad or good for children. We find that it depends on the age group.

This animated comedy has a fast-paced nature which is better for older children because they may find it easier to keep up with, as compared to younger children.

If you have younger children, this show is not suitable for them.

Instead of “SpongeBob SquarePants”, you could let your child watch “Phineas and Ferb”.

It retains the element of comedy that SpongeBob has, while still being easy for children to process.

“Pokemon” is a classic anime for so many of us who grew up watching the show. Pokemon’s cute animals and positive messages of teamwork, sportsmanship, and respecting elders make it appealing to parents and children.

However, as a parent, you will notice that “Pokemon” has scenes of fantasy violence (notably when two pokemons are fighting on behalf of their trainer) which might be inappropriate for your child.

You might fancy letting your child watch “Wild Kratts” instead!

This animated series is a more educational and less violent option as it showcases many animals and teaches children about animal behaviour, habitats, and adaptation. Although this comedic slapstick duo is a good laugh for the family, studies show that Tom and Jerry encourage kids to be violent because of its many scenes of animated violence.

If your child enjoys humourous shows like “Tom and Jerry”, a better substitute is “Blue’s Clues”.

This American comedy children’s series is interactive and funny while still being non-violent. As parents, we must make sure that the content our children watch does not influence them negatively.

By supervising your child and making sure that the shows are suitable for their age group, they can watch the shows they like and still learn valuable life lessons!

Let us know what shows you let your children watch!