You’ve heard the news – The age-old PSLE T-score will be replaced by the new eight Achievement Levels (AL) system from 2021.

According to Prime Minister Lee Hsien Loong, who noted the “tremendous stress” on students and families – the changes would “reduce excessive competition to chase that last point.”

That would seem to imply that the new PSLE scoring system somehow reduces the stress of PSLE.

However, don’t be fooled.

The only students who won’t be “chasing that last point” are those who are already confident of attaining the max 4 points (>90 marks for all 4 subjects). To put that into perspective, that’s almost equivalent to attaining >270 according to the old PSLE T-Score!

All the other pupils will still be fighting for every last point in order to attain the best possible score in order to enter into good schools.

As Acting Minister for Education Ng Chee Meng said “some things are best evolved and not revolutionized”. Then, what has changed? That’s precisely what this article is about, so read on.

A brief Introduction to the new PSLE scoring system

Just in case you’re still kept in the dark, a pupil’s new total score will be the sum of the ALs attained for each of the 4 PSLE subjects. The best possible score is 4 (AL1 x 4), as seen below. 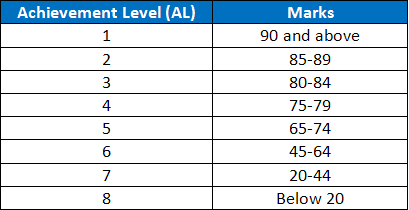 There will also be new streaming system as follows:

1. There is now a clear bottom Class

Previously, for students scoring 60+ or 70+, there is still a feeling like they scored part of the exam correct. With the new ranking, these numbers will now band them into AL5 (65-74) or AL6 (Below 64).

These bottom numbers certainly do not feel as forgiving.

Those kids who scored 6-8 would feel “we are the worst!” whereas they might not have felt the same way with the old system.

What would be the effect on their psyche?

2. More pressure to be the top

Conversely, I can already hear it in my head “Why you’re not number 1?”

With the old T-score system, a lot of Singaporean parents will simply urge their children to do as well as they can; scoring 240+ or 250 is usually considered good enough.

However, with the new PSLE scoring system, there is now a clear divide between good (AL2 or AL3) and elite (AL1). 85-90 marks is not as good as scoring above 90. Good is now not good enough.

Moreover, when we look at the current O-level scoring system, we’ll notice that the new PSLE system is very similar. More and more students will be attaining the max score of AL4 (for O-levels, L1R5 six-points), soon the top few schools will all require a minimum score of AL4.

Brighter students will be incessantly pushed to score none other than the coveted AL1. There’s going to be so much more focus and pressure to be at the top. Whilst that certainly means good business for my tuition agency, I worry for our future 11-12 year-olds.

3. More stress because every point matters

This sounds scary. Based on the current system, the same student is well within the express stream of 216/300!

With the new AL system, every mark matters because if a student scores a mark lesser, their band may go down by 1 grade!

This phenomenon will only serve to increase stress and make students scramble for every last mark, contrary to what our beloved PM said.

During my time, I recall applying for Nanhua Sec, Saint Joseph’s Institution, and Bukit Panjang Govt. High. Those schools had close cut-off points but I could clearly tell which school I could qualify for based on my PSLE Score.

With the new system, schools will be less differentiated based on cut-off points. For example, those 3 schools might all have a cut-off of AL8:

This means that more students with identical PSLE Scores will be vying for places in a particular school.

How then would these schools select its students apart from basing its options on the students’ school choices and some random balloting?

On the whole, this means that students will not just need to strive academically but will also be required to excel holistically in their CCAs and other activities in order to secure places in top schools.

So in conclusion, does the new PSLE scoring system really reduce stress? I doubt so.

What do you think? Share your opinions in the comments below!

What Causes Mind Blanks During Exams?
Giving Children an Allowance Could Teach Them Financial Literacy
Career Coaching in Singapore
What Are Burnouts And How Do They Affect Students?
Do’s and Don’ts for Biology Homework Help for Students
8 Mind-Boggling Human Biology Facts to Tell Your Child to Create Interest in Biology